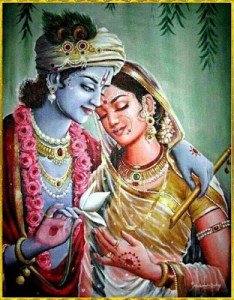 There isn’t a single time we haven’t addressed Krishna as Radhe Krishna. The inseparable name is made for each other and completes each other. But why does Krishna leave Radha? How was Radha after Krishna left her? read this article till the end to know why Krishna doesn’t marry Radha.

Krishna and Radha are not different, they are two entities with the same soul.

We all know that Krishna spent his childhood in Vrindavan, Radha was from a small village that was 7kms away from Vrindavan, known as Barsana. Vrindavan was the place where Radha
and Krishna danced together, played together, fought together, and loved each other like no one would in this world. Raas- Leela is a form of love between Krishna and Radha and is a form of pure devotion and love to god. When Krishna was leaving for Dwarikapuri, Radha asked him, “why don’t you marry me now and take me with you?” then Krishna turned back and became like Radha. Then Krishna answered,” for marriage, we need two souls which are different. How can the same soul marry each other?” This incident shows that Radha was beyond love and devotion and no relationship can bind them, They both are one and inseparable.

Rukmini is a form of Goddess Lakshmi

Krishna’s wife is Rukmini. Why doesn’t Krishna marry Radha when he loved her? This is because Radha and Rukmini are one and the same. We know according to the Dashavatara, Vishnu was born with many avatars for the betterment of the world. Like how Ram married Sita who was Vishnu and Lakshmi

Krishna is the 8th avatar of Lord Vishnu and his birth marks the beginning of Kal yuga ( which is still there presently) and Goddess Lakshmi who is the wife of Lord Vishnu was also born in the same yuga as Rukmini. Rukmini was born to King Bhishmaka of Vidharba and is a divine form of Shakti.

When Rukmini was born in Vidharba, a demoness named Putana had come to kill Rukmini. Putana took an avatar of a beautiful lady who wanted to feed her with milk. Putana tried many times to feed her, but Rukmini refused to take it, then Putana kidnapped her and flew high in the air, the villagers of Vidharba tried to follow her, but they lost track and thought Rukmini was dead. But, Rukmini became double her weight and became so heavy that Putana dropped her. Baby Rukmini fell over a beautiful lotus above a pond.

A couple, Vrishabhanu and Kirti were walking by the banks of the pond and spot their eyes on the lotus and as a blessing from God they took the baby and then named her “Radha”

Bhiskmaka gets to know that Radha is Rukmini

After years pass, Radha is identified as Rukmini and is taken back to Vidharba. Rukmini lives in Vidharba again, but the people in Vidharba are agaist Krishna and do not like him. Rukmini never wanted to marry anyone except Krishna , But her brother Rukmi decides to marry Rukmini off with Maharaj Shisupal. Seeing her immense love for Krishna as her room was surrounded with Krishna’s paintings , his peacock it made him very angry and decided to marry her off.

Krishna somehow wants to marry Rukmini, so he kidnaps Rukmini and marry’s her in Dwaraka. Krishna defeats Her brother Rukmi and sends him off. You will notice why Rukmini’s name never came when Radha was in his life, and Why Radha’s name never came when Rukmini was married to Krishna. Because Radha and Rukmini are one and the same so Krishna marries Rukmini.