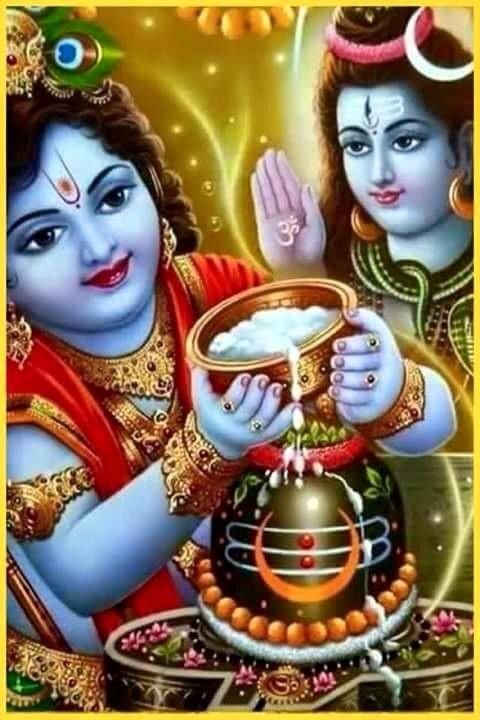 Are Krishna and Shiva the same?

The devotees of Krishna and Shiva Mahadev equally present in this world. “ Hari and Hara”

Advertisement
are like the two sides of a coin with most of it they are one and the same. Krishna is known as the 8th Avatar of the Lord of the Lords, Vishnu or Narayana. Whereas Shiva is called Swayambhu who is not born by a human and does not have an end. After reading this article you will get to know if Shri Krishna and Mahadev are the same or not.

Are Shri Krishna and Mahadev the same?

Creator of The Universe:

When there were no people on earth, no other god, nor any other celestial body, no fire or stars. Vishnu is the only supreme god in the universe, that is why he is known as “Parameshwar”.Vishnu is the creator of Bramha and Bramha, the creator of the people. According to the Puranas, we know that Bramha was born from the navel of Vishnu while Bramha was sitting on a lotus. Bramha created the entire living beings and destined their fate. Krishna and Vishnu are the same since the 8th avatar of Vishnu are Krishna.

Vishnu, Like Shiva, is addressed as Adhidev. Meaning he was also the Supreme god. In the book, Narayan Upanishad it says that “ Lord Vishnu is the supreme god, where Bramha and the 11th Rudra – Lord shiva was also formed from him”. So, Shiva was born from Krishna. Shiva remains unaware because the god himself has cast magic over Shiva which doesn’t allow him to ask about his past life. Out of all the Rudra’s he is Shiva. In Yakshas and Rakshasa’s Shiva is the lord of wealth, Vaasus he is Agni and of the mountains, he is the Meru.

Once Shiva was meditating in the hills and got to know that the 8th Avatar of Vishnu has been born, who is in Gokul. Parvati tells Lord Shiva to get butter from Gokul as the tastiest butter is available in Krishna’s place. So, Shiva without any further due went Gokul. He thinks of changing his disguise into a Brahmin but later he thinks to see his Greatest devotee Krishna. He would go in his original form. Shiva goes and stands near the door asking if Yashoda could offer him something.

Then Yashoda says, “you seem to be hungry and have torn clothes” Let me get you the finest clothes and food to offer. One clever Gopika from them asks Krishna’s mom if there were any stranger who had come to their home recently, then Yashoda describes how Shiva looked, hearing this the Gopika said it might be a curse that man has put on this child. They shouldn’t leave with dissatisfaction. Shiva had fallen in love with the Beautiful God while he was getting the pots filled with Butter he didn’t realize he ate butter thinking about Krishna on the journey to Kailash and gave the empty container to Parvati!

Parvati then curses Shiva that no one would eat your prasad after the devotees worship Mahadev.

Who is Greater Krishna or Shiva?

Krishna and Shiva are one and the same, we see so many similarities between the two gods. It says they are no different from each other just like how milk and curd are the same, yet different. Milk comes first then curd. First came Krishna or Vishnu then came shiva yet they are equally important

Out of the Vaishnava’s Shiva is the most superior. Shiva worships Lord Vishnu and that why Vishnu pooja comes first.