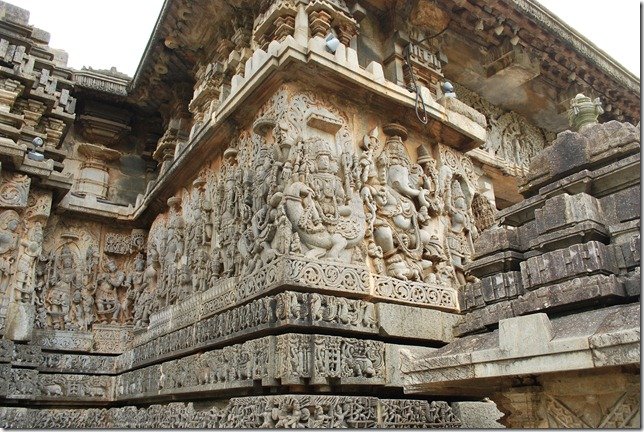 Hoysaleshwar temple is located in the South of India, Near Hassan district, Halebeedu. Hoysaleshwar temple attracts tourists from all over the globe, including foreigners. It has all the mythologies of India including Mahabharat and Ramayana sculpted beautifully on the walls and pillars of the temple since the 12th century. The Hoysala’s constructed 92 temples all over Karnataka, but the famous are Belur, Halebeedu, and Somanathapura Temple. The temple is now preserved after many invaders like Alauddin Khiliji in the early 14th century and another invasion by Sultan Muhammed bin Tuglaq.

Although they look alike but are all different religious shrines. Vishnuwardana built the Belur temple and Halebeedu was built by KetuMalla, who was the chief minister during that time. KetuMalla was a great Shiva devotee, and in the memory of the king and queen he built the Halebeedu temple, here there are two shiv lings on their names. Shantaleshwar is the Queen’s name and Hoysaleshwar is the king. Hoysaleshwar temple is a twin temple where two temples are there in one or Known as Dwikuta in Sanskrit. Similarly, they have only one temple in Belur which is called Ekakuta. Somanathapura is unlike situated in the Mysore district and has three temples or known as Trikuta. Halebeedu took 190 years to build, unlike Belur which took 103 years, because of twin temple construction.

Why is the name Halebeedu?

“Dwarasamudra” was the original name for Halebeedu before many centuries. Since there were invaders who came and destroyed the statues, it still remains damaged. People of the Delhi Sultan, Alauddin Khiliji in the early 14th century and another invasion by Sultan Muhammed bin Tuglaq after years of continuous damage. In Kannada “ Haalada” means damaged and Beedu means house.

The Unique Architecture of Halebeedu:

It is very astonishing to see these Pillars which have been done around the 11th or 12th century. The pillars you see in the image above need modern equipment and technology like a “turning” mechanism to do the fine lines. But the fact is that machines like this were all invented recently. How did man a man be so skilled for this? Then how did they create a masterpiece during the 11th century?

In this image you can see elephants in the pillar downside, which says in order to build this temple, they took raw materials from far away and used elephants as a medium to carry these materials. Also, the strength of the elephant is such that it can carry the whole pillar, next came the cow/bull, the horse, and finally the men who were 50,000 of them who could build. To sculpt these minor precisions also needs modern equipment like scalpel and machines.

The Trimurti statue is the three main gods of Hinduism depicted here, Bramha, Vishnu, and Maheshwara on the Southside of the pillar. These are the gods of creation, maintenance, and destruction respectively.

Smashana Bhairava statue built here. Observe the left hand of the deity you can notice a wheel type design or sort of machine. When you notice this properly it seems like a “mechanical gear”. The outside gears have 32 spikes in this and the inside gear has 16 spikes. Which is a perfect 2:1 ratio, if this was an imaginary object or a character, then why did the sculptor do this.

This is a very famous Nandi where people come from all around the world to worship. The specialty of this Nandi is that it was made with only one stone. When you come closer you can see your face clearly and this shows how well it was polished using tools.

In both these images, it describes a story of Vishnu and the other one Bheem fighting with a Rakshas as he has the ‘strength of 100 elephants’. If you notice closely the weapons in both images, the top left arm of Vishnu and Bheem’s hand risen resembles a polishing tool.

The fact is that during the 11th and 12th century there were no machines. There is also a possibility that there were tools and machines in India during that time? but we cannot say anything it could be that the people were too skilled for all these artifacts we see till date.