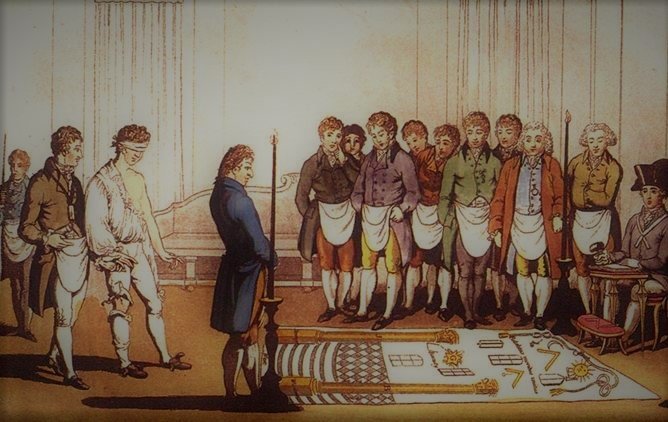 Ever wondered which is the most secretive religion and secretive society? The most known is this Free Masonry which is rich in rituals and filled with many conspiracy theories. These people belong to only men, for the teaching and preaching. It is not only popular in the British empire but also in the United States. Freemasonry remains most popular in the British Isles and other countries originally within the empire. Estimates of the worldwide membership of Freemasonry in the early 21st century ranged from about two million to more than six million.

Where have we seen this symbol?

I’m sure you would have come across this picture once. Have you seen the Illuminati picture, which consists of a triangle with an eye in the center? Or if you visited America, there is a triangle with an eye in the dollar. These are all the signs of how it has applied masonic symbols over various things. Its masonry lies foundations of many buildings like the Statue of Liberty and other iconic structures in America. It is called the cornerstone of America and is also world’s largest and oldest Fraternity. While doing crimes it also applies masonic principles.

How does one become a Mason?

If one wants to become a mason, it isn’t possible in India. But In Britain or America you must:

Being a very secretive community, they don’t describe everything that does around but they believe that “Whatever happens in this world, is happening because of you” or you are the reason for all the bad things that are happening in the world. This is one of their beliefs that they preach.

Famous People who were a Part of Free Masonry:

History of How Free Masonry started:

It started in medieval Europe as guilt for stonemasons, it was like a punishment but it lived on as a social organization. In 1738 the pope of the churches was given a degree against freemasonry and It still applies today. It flourished in Europe for many decades, With the decline of cathedral buildings, some lodges of operative (working) masons began to accept honorary members to bolster their declining membership. A few of these lodges developed modern symbolic or speculative Freemasonry, particularly in the 17th and 18th centuries, and adopted the rites and trappings of ancient religious orders and chivalric brotherhoods.

In most lodges in most countries, Freemasons are divided into three major degrees—

entered apprentice, fellow of the craft, and master mason.

In many lodges there are numerous degrees—sometimes as many as a thousand—superimposed on the three major divisions; these organizational features are not uniform from country to country.

In addition, the female relatives of master masons can join the Order of the Eastern Star, which is open to both.