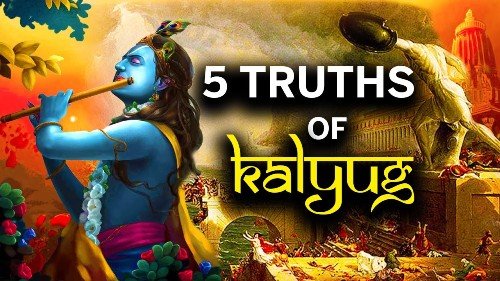 As we all know Krishna is the 9th avatar of Lord Vishnu. At The Time Of Mahabharata War Lord Krishna Told 5 Predictions of Kali Yuga to Pandavas.

Once Krishna asked the Pandava to go out in five different directions and report to him whatever strange thing they saw and he would explain them how they were the symptoms of kali yuga.

Yudhisthira saw to his surprise an Elephant with two trunks.

Krishna explained that the elephant with two trunks symbolized the rulers of Kali Yuga. They would speak one thing and do another, They would exploit the people from both the ends.

Arjuna saw that Vedic Mantras were inscribed on the wings of a bird but at the same time it was eating the flesh of an animal. He was shocked to see such an act by a divine bird.

Krishna explained that the priests in Kali Yuga will sure to have great knowledge will perform religious act and duties. But on the other hand they will desire for material pleasures and will exploit the devotees.
People would always wish for the death of others so that they can possess their wealth No matter how big a person would be he would always dream for the property of other beings.

Bhima saw a cow which was about to give birth. After giving birth the cow started licking the calf. That took his surprise the cow did not stop it kept licking even after the calf was clean. With great efforts people separated the calf from mother but by that time the calf was badly injured.

Krishna explained that it symbolizes that in Kali Yuga the people will love the children so much. That the love itself will destroy the capabilities, life’s dreams and the future of the children. They would completely ignore their spiritual life.

Lord Shri Krishna said to this that the empty well signifies that Poor will live among the rich. The rich people will have massive amount of wealth and prosperity which will keep increasing and overflowing but they will not offer a single penny to the poor ones. They will waste the money for themselves but they won’t be sharing it with those who are needy and suffering.

Nakula saw a big boulder falling down from a hill. It could not be stopped by the big trees or other rocks on the way downbut was stopped for a small plant which was on its way. He was stunned at the sight.

Lord Shri Krishna explained that the falling rock symbolized how people will live in Kali Yuga. People will fall in character they would keep destroying and crushing everything on the way to success. But they would have no peace of mind nothing would be able to give them peace and happiness except chanting the small but all-powerful little name of the Lord. Just one call on the God’s name will help them to hold them from the room.

Hence, Chanting Hare Krishna MahaMantra will give you peace and happiness in this Kali Yuga.

Therefore, we should chant

Let us know your opinion about this article in the comment box.